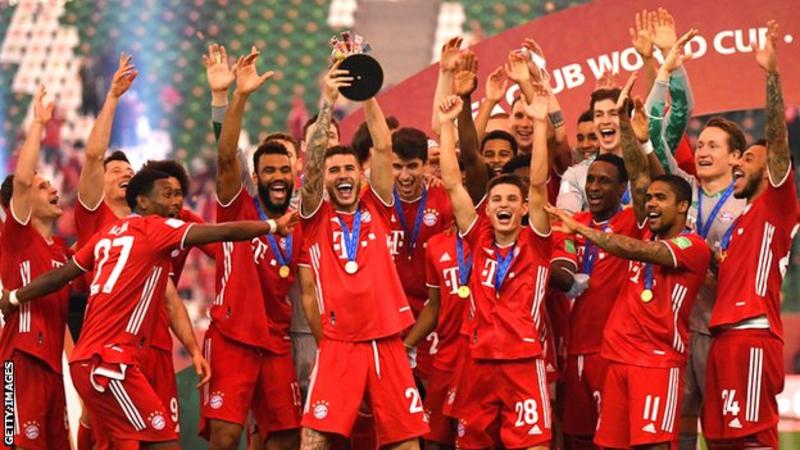 Bayern Munich won the 2020 edition of the Club World Cup, which was postponed until February 2021 because of the coronavirus pandemic

The new scheduling of the Fifa Club World Cup is “disrespectful” to Africa, according to former Egypt international Mido.

The world governing body’s tournament was due to take place in December but is now set to be held from 3-12 February in the United Arab Emirates after original hosts Japan pulled out because of the Covid-19 pandemic.

The revised dates clash with the culmination of the Africa Cup of Nations, which will see the continent’s national champions decided in the final on 6 February in Cameroon.

Egyptians Al Ahly will be Africa’s representatives in the UAE and could be without several players depending on their respective countries’ progress at the Nations Cup.

“Fifa deciding to hold the Club World Cup while Afcon is going on is a sign of disrespect to African football,” former Ajax and Tottenham striker Mido said on Twitter.

“It wouldn’t have been the case with the Euros or Copa America.”

The Club World Cup sees the winners of the continental cups in Fifa’s six confederations, along with the UAE league champions, compete to become world club champions.

Al Ahly says its participation in the tournament will be impacted as the club expects to have “more than seven players” in the Egypt squad for the Nations Cup, along with three other internationals on duty in Cameroon.

The Cairo-based outfit will write official letters to the Egyptian FA, Nations Cup organisers Confederation of African Football and Fifa on Tuesday, requesting the three bodies “collaborate to resolve the clash of dates” between the two events.

Al Ahly, holders of the African Champions League, will face CF Monterrey of Mexico when they enter the Club World Cup in the second round, which is likely to take place on the same day as the Nations Cup final.

The winners of that match will play newly-crowned Copa Libertadores champions Palmeiras in the semi-finals, while European champions Chelsea take on either Al Hilal, Al Jazira or Auckland City in the other last-four tie.

The Blues may be missing goalkeeper Edouard Mendy and winger Hakim Ziyech if Senegal and Morocco respectively have good runs at the Nations Cup.